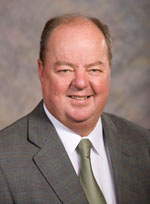 Gene Voiland received a BS in chemical engineering from WSU in 1969. He worked for Shell Oil Company for nearly 30 years in a variety of positions. There, he met his wife, Linda, a graduate of the University of Houston. He later became President and CEO of CalResources LLC and Aera Energy LLC, a subsidiary of Royal Dutch Shell and ExxonMobil. He retired in 2007.

The Voilands have been active supporters of WSU for many years. Gene led the Investment Committee for the WSU Foundation and is a member of the Foundation’s Boards of Governors. He also serves on advisory boards for both the College of Engineering and Architecture and the School of Chemical Engineering and Bioengineering. He received the Chemical Engineering Alumni Achievement Award in 1991, the WSU Alumni Achievement Award in 1999, and the WSU Foundation Outstanding Service Award in 2000.