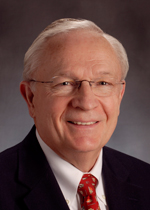 David Ensor went green before it was cool. One could say he was on the environmental bandwagon early when no one could have foreseen it would be a major trend over the next four decades.

“I made the decision to go into environmental engineering before the first Earth Day; this was before the Environmental Protection Agency,” Ensor said. “People thought I was absolutely nuts.”

Ensor was recently honored with the Gene and Linda Voiland School of Chemical Engineering and Bioengineering Distinguished Alumnus Award.

“I wanted to do something a little more relevant to our future,” he said. “One reason I made this decision was it seemed to me that the problems in the environment needed to be solved.”

He also met his wife, Sally, who was a student in the Department of Library Science at the University of Washington. His career choice made sense to her because “Basically, he was either outdoors hiking and mountain climbing or studying and working in the lab,” she said.

Ensor went on to become an expert in aerosol and air pollution science. In recent years, he has been applying his aerosol expertise to nanotechnology research and international standards development as a United States delegate to the International Organization for Standardization (ISO).

His work has ranged from some of the first air quality projects in Southern California to recent research into how indoor air filters work. He worked for Meteorology Research Inc of Altadena, CA and is currently employed by RTI International in North Carolina. During the last 38 years, he has managed departments and centers performing projects for EPA, Department of Energy, Department of Defense, Department of Homeland Security, Electrical Power Research Institute, and private corporations.

Currently as a RTI Senior Fellow, Ensor is editing a book about the history of aerosol science in addition to his research responsibilities. He has several patents, almost 200 publications, recognition as one of the Founding Editors-in-Chief of Aerosol Science and Technology, and several prestigious awards, including the Hammer Award from the White House during the Clinton Administration and the Meritorious Service Award from the American National Standards Institute.

Ensor credits a variety of things for his success, including a high school shop class that taught him about designing projects and finishing them, the importance of a strong work ethic, and how to draft technical plans.

“It’s not about which classes you take, it’s what you get out of them and how you apply them,” he said.
Although he moved on, he also always remembers the impact of WSU.

“I came from a small high school (Reardan Washington), went to WSU, and, in four years, I was employable,” he said. “Almost everyone from WSU can say that.”

In particular, he credits former CEA faculty member and the first Chemical Engineering Department Chair, George Austin, with inspiring him to move into environmental research.

“Austin was quite an individual. He used to tell stories illustrating the importance of identifying and solving the right problems. That’s one reason I decided to go into the environmental field,” Ensor said. “Without inspiration of the contrarian world view George Austin had, I probably wouldn’t have made that decision.”

He was surprised and honored to receive the award. It means a lot to him to be recognized, he says, but his selection is “still a mystery.”

“I don’t feel like I have done anything significant at this point. It’s a lot of little things,” Ensor said. “I haven’t saved the environment yet but we’re working on it.”