The research of Lin’s group is focused on coupling chemical processes with novel material systems for renewable energy and clean fuel production. The research is primarily a span of discovering new catalysts and advanced functional materials, as well as developing efficient and environmentally friendly chemical processes for energy and environmental applications. The following diagram describes the research background and interests: 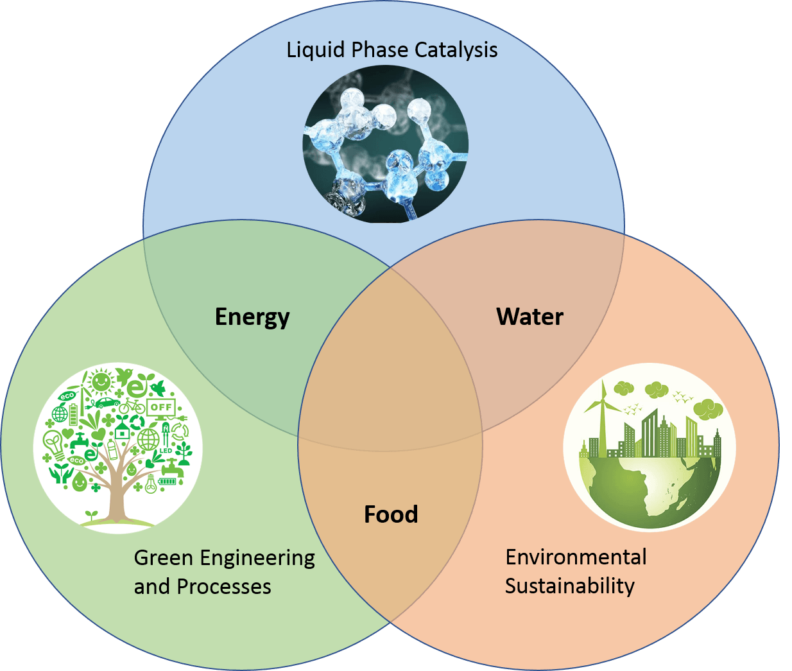 Climate change represents one of the greatest environmental threats in mankind’s history. The emission of greenhouse gases, primarily carbon dioxide (CO2) from the burning of fossil fuels, is a significant contributing cause of climate change. Recently, the catalytic reduction of carbon dioxide (CO2) to value added chemicals has received a great deal of attention for the reason that closing the carbon cycle by industrial technology can indeed solve two major problems, i.e., “Global Warming” and “Energy Crisis”.

Creating alternatives to petroleum based fuels, chemicals and other products, has been stimulated by environmental concerns, increased costs of fossil fuels, and diminishing petroleum resources. Reliance on fossil fuels exposes the U.S. to a range of fluctuations, such as the changing price of crude oil and problems with supply and demand. Sustainable biofuels are an attractive alternative due to the abundant domestic biomass supply and the potential to reduce the carbon footprint by up to 80%.

This project will focus on two common arid lands plants, Gindelia squarrosa (curtly top gumweed), and Ericameria nauseosa (rabbitbrush). Both plants are prevalent in the intermountain west on lands that are not generally suitable for food and feed crops, and both have potential as biofuel sources, but also for higher value industrial and consumer products. Rabbitbrush produces rubber, and gumweed produces a chemical, grindelic acid, which has properties similar to the industrial product, abietic acid. Thus, this investigation, by engineers, chemists and agronomists, will examine a variety of avenues to produce fuels and biomaterials on lands that will not compete with food crops.

Sustainable production of lignocellulosic biofuels relies upon the sufficient supply of biomass feedstocks. Drought-tolerant bioenergy crops growing on arid marginal lands, Agave and Opuntia, store a large amount of water and carbohydrates during the growth, and have enormous potential as dedicated biofuel feedstocks because they do not compete with food production and minimize the use of water and fertilizer resources. However, lack of water-use efficient and cost-effective bio-refining processes hinders the deployment of biofuel production facilities in vast dry areas covering more than 40% of the world’s land surface.

This proposal aims to integrate research on chemical engineering, agriculture, environment, and biofuels with educational and outreach efforts to demonstrate the importance of science and engineering. The results from this proposal will be disseminated across a wide audience through the Nevada Renewable Energy Consortium (NVREC). The newest research outcomes will be presented to groups across campus as well as the local community in the Biofuels/Biomass Journal Club at UNR. The research results will also be incorporated into the current graduate and undergraduate level courses in a timely manner. Several undergraduate and graduate students will be trained in this project under the PIs’ close mentoring. The outreach activities like free presentations are targeted at students at selected local high schools and the general public at the Reno Discovery Museum.

The United States energy security demands a gradual shift from a petroleum-based economy to a sustainable domestic biomass dependent economy. The Department of Energy (DOE) predicts that 20% of transportation fuel consumed in the US will be produced from biomass by 2017. Lignocellulosic biomass is the most abundant source of renewable organic carbon on earth and has the potential of replacing petroleum to supply transportation fuels. However, lack of cost-effective biorefining processes is the roadblock of the commercial production of fuels from lignocellulosic biomass. Current thermo-chemical conversion technologies including gasification, pyrolysis, and hydrothermal liquefaction need significant external energy inputs. Bio-chemical conversion processes are kinetically slow, require hydrolysis pretreatment, and cannot utilize lignin. In short, all current or emerging technologies are hindered by high costs associated to energy-intensive operations and/or low yield of finished fuel products.

Advanced nanomaterials for the applications on energy and environment

Core/shell nanostructured metal catalysts – The discovery of nanomaterials brought a revolutionary development in catalysis. Numerous research efforts have proved the superior performance of nano-catalysts for various reaction systems. However, few nano-catalysts have been commercially used in chemical industries. Catalyst deactivation due to sintering is the major obstacle preventing nano-catalysts, especially metal catalysts, from widely commercial use. Sintering resistance is therefore extremely important for the advancement of nano-catalysts. One solution to solve this grand challenging problem is to package each individual nano-catalyst inside a cavity of inert shell forming a core/shell nanostructure. The shell functions as a buffer between individual nano-catalysts and prevents nano-catalysts from contacting each other to avoid sintering. For proof of concept, Pd was chosen for the model study. Pd@SiO2 catalysts were synthesized using a versatile microemulsion method to form porous encapsulated PdO nanoparticles of 4.2±2.0 nm. The stability of the encapsulated Pd catalysts for CO oxidation compared to traditional silica supported Pd catalysts is considerably improved under identical reaction conditions. Minimal sintering was observed with thermal treatment up to 700°C in air for the Pd@SiO2 catalysts. In practice, this would allow for high temperature catalyst decoking and regeneration in industrial applications without irreversible changes to the catalyst. In contrast to the impregnated Pd catalysts, the silica encapsulated Pd nanoparticles exhibited activity for acetylene hydrogenation in temperatures as low as 15°C. Future work will involve tuning the mass-transport properties and synergistic functions of the shell to promote reaction activity and selectivity of the core.

Fuel cell electrocatalyst – Fuel cells are an important enabling technology for the clean energy economy. The electrocatalytic oxygen reduction reaction (ORR) plays the central role in fuel cells since ORR is the rate-limiting step. Platinum is used as the preferred ORR electrocatalyst because of its relatively high performance. However, the high cost and limited supply of platinum hinder the commercialization of the fuel cell technology. It is widely acknowledged that no single metal beats platinum as the ORR electrocatalyst. On the other hand, it is not uncommon that metal alloy electrocatalysts shed light on effectiveness of synergistic effects in enhancing electrocatalytic performance. Bi-functional electrocatalysts combine a metal for dissociation of molecular oxygen with an active metal oxide to promote the subsequent reduction of reaction intermediate leading to complete oxygen reduction. Selected candidate material pairs a high oxygen affinity oxides (CoOx) with a platinum alternative metal with oxygen reduction activity (Au). The Au/CoOx binary nanoclusters prepared by electrochemical codeposition were found to be more active than either gold or cobalt oxides for the ORR in alkaline solutions. The enhanced electrocatalytic ORR activities were confirmed by the measurements of voltammetry and the kinetic study using a rotating disk electrode (RDE). An increased electronegativity (negative valence) of Au in the Au/CoOx system was observed and corresponded to an enhancement in the ORR activity. A pseudo-four electron reduction pathway is presented where molecular oxygen reduction is facilitated by Au while the Co sites catalyzing the removal of hydrogen peroxide, which is sluggish in reduction.

Photo-inactive dielectric nanoparticles – Semiconductor light-emitting diodes (LED) are emerging as the next generation of lighting technology, which could decrease worldwide total electricity consumption by more than 10%. One of the challenges of LED technology is how to improve the photon extraction efficiency and increase the lifetime. Polymer encapsulation protects the semiconductor from outside environment and thus extends the lifetime but the disadvantage is the low refractive index of polymer encapsulants limiting the light extraction. To solve this problem, we worked on incorporating well-dispersed inorganic nanoparticles with high refractive index into the encapsulating polymer matrix to increase the overall refractive index of the encapsulant. We proposed to use silicon carbide (SiC) as the nanofiller due to its high refractive index, chemical inertness, photo-inactivity, and high thermal conductivity. However, synthesis of SiC nanoparticles is very challenging. Industrial SiC powders are manufactured at extremely high temperatures (2000–2300°C) to overcome the activation energy barrier, which inevitably leads to sintering of the SiC into large polydispersed aggregates. Instead of adopting the traditional thermal synthesis methods, we synthesized SiC nanoparticles in a cold plasma, the electronic system selectively excited producing extremely ‘hot’ energetic electrons which are not in equilibrium with reactant molecules at much lower temperatures. The reactant molecules can be partially ionized or dissociated and thus highly activated by the energetic electrons. Furthermore, during synthesis, the particles carry electric charges of equal sign. The low reaction temperature and the electrostatic repulsion enable reduced particle growth and minimized agglomeration, the key for nanoparticle synthesis. Monodispersed SiC nanoparticles with an average size of 5 nm were successfully synthesized in the novel low-pressure microwave plasma reactor. To the best of our knowledge, this is so far the record of the smallest SiC nanoparticle by using a continuous gas-phase process with commercial potential.