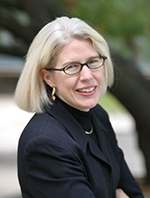 Mary Rezac, Ph.D.
Professor of Chemical Engineering
Dean of the Voiland College of Engineering and Architecture

Rezac received a bachelor’s degree in chemical engineering from Kansas State University in 1987. She worked for the Phillips Petroleum Company’s research and development division before returning to graduate school at the University of Texas in Austin where she received a master’s degree and doctorate in chemical engineering. In 1994, she joined the faculty of the Georgia Institute of Technology’s School of Chemical Engineering. She was promoted to associate professor in 1998 and served in numerous administrative capacities for both the school and the college.

She returned to Kansas State in 2002 as an associate professor. She was promoted to professor and department head in 2004 and served as department head until 2009. During that period, Rezac recruited and hired three new faculty members, expanded the Ph.D. program and led efforts to increase the undergraduate enrollment by more than 50 percent. In 2015, she was named the first recipient of the Tim Taylor Professor of Chemical Engineering and selected to serve as the interim associate vice president for research at Kansas State. In 2017, Rezac was named dean of Washington State University’s Voiland College of Engineering and Architecture.

Rezac’s personal research ranges from molecular-level fundamentals of new separation processes to integration of this knowledge with industrial scale processes. Her work has primarily focuses on the use of polymeric membranes to separate gas and liquid mixtures. Applications have included energy, chemicals, and pharmaceuticals.

Rezac has directed more than 30 graduate students and received research and teaching awards at the Georgia Institute of Technology and Kansas State. She has served on numerous policy-making groups, including the Council for Chemical Research, the American Institute of Chemical Engineers and the National Research Council. Rezac holds multiple patents and has co-authored over 250 publications and presentations.