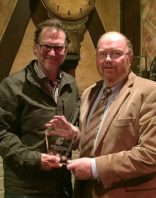 Mr. Roark is an experienced CEO, serial entrepreneur, active angel investor and board member for technology businesses with experience in the life science industry and beyond. He is currently the CEO of Gestalt Diagnostics. Previous roles include CEO & Founder of Matrical Bioscience in Spokane Washington, a business he sold in 2013 to Brooks Automation (Nasdaq: BRKS) and assumed the position of VP for Strategic Business and Market Development until 2016. He formerly was the VP & Founder of CCS Instruments based in Torrance, California. A business he sold in 1998 to Packard Bioscience (Nasdaq: PBSC) and subsequently into Perkin Elmer (NYSE: PKI) where he worked as the VP General Manager until 2002. Prior to these roles, he worked at Tecan Group Ltd (SWX: TECN) in their US Division based in Research Triangle Park, North Carolina in Applications, Product and Sales Management roles, from 1988 to 1993.

Mr. Roark’s focus has encompassed development and commercialization of innovative and patented industrial automation and consumables that have fueled several technologies including the Human Genome Project, High Throughput Drug Screening at top tier pharmaceutical and biotech companies, improved food crop breeding operations at leading Agriculture companies, diagnostic biomarker testing for cancer and genetic disorders, blood bank screening for infectious diseases, and provided automated storage systems holding millions of chemical or biological samples used for new drug development and population genomics efforts for world leading pharmaceutical and government sponsored academic institutes and clinical hospitals. His leadership spans engineering, business operations, and market development efforts in the USA, Europe, Asia, and South America. He received B.S. degrees in Biochemistry and Chemical Engineering from Whitworth University in 1984 and Washington State University in 1987. His interests include mentoring startups, reading, spending time in the outdoors skiing, hiking, and biking. He has 3 grown children and his daughter is currently a COUG in the interior design program