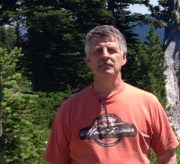 The training that Paul Smith (B.S., ’82) received as a chemical engineering student at Washington State University provided him with the problem-solving skills that he has used throughout his career.

“When I graduated in 1982, it was impossible for me to think of where I am today,” he says. “There is no way you can begin to imagine where you’ll be in 20 or 30 years.”
Engineering, he says, is simply a good foundation for a successful career.

Smith, a senior vice-president at IPC (USA), Inc., a trader and wholesale distributor of petroleum products that is headquartered in Irvine, California, was recently named the 2014 Distinguished Chemical Engineering Alumnus from the Voiland School of Chemical Engineering and Bioengineering.

“It’s impossible to know what that building is going to look like when you get done. Just keep your eyes open and work hard,” he told students when he was recently on campus to receive his award.

At WSU, Smith says, he first learned to look at problems as opportunities.

“I was taught how to attack and solve a problem,” he says. “In engineering, you come from a problem at one angle, and then you back up and try again. My problem solving has been the key to my success.”

Smith went into the U.S. Navy immediately after high school for six years and was a non-traditional student when he came to WSU in January of 1978. His Navy experience working as a machinist mate and running an engine room, as well as his penchant for science and math made chemical engineering an obvious course of study.

Smith came to WSU with a “workman’s attitude” about school, he says. With his and his wife’s commuting schedule, his school life was more like work than school. He would be to school by 8 a.m. and would leave at 5 p.m., so he rarely needed to do homework at night or on the weekends.

“Honestly, I felt like the old man at 24,” he said. “In most of my classes, I was the old man of the group. It kept me from being behind or having to cram.”

His years at WSU were a tremendous experience, he says. The work was challenging, as he struggled through organic chemistry and physics. But, faculty provided strong support, and he often took advantage of their office hours. “I was always in somebody’s office asking questions,” he said. “I was never hesitant to go see a professor. In the end, that’s what got me through.”

After graduation, Smith went to work for Mobil at the Ferndale, Washington refinery. He has had a longtime career in the oil industry and has held positions at U.S. Oil, Tosco in Seattle, and ConocoPhillips.

Little of that time was spent doing engineering. Yet, he says, his engineering training and understanding of the refining process gave him a tremendous advantage when dealing with suppliers.

“Even without direct knowledge of all the technical aspects, I could pick things up easily,” he said. “It was a tremendous advantage to understand how things work. Engineering was key to this business.”

Smith says he was surprised and honored to receive the Distinguished Alumni award.