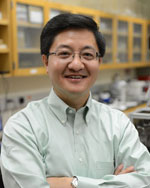 Dr. Wang joined PNNL in 1994 and was promoted to Laboratory Fellow in 2005. He led the Catalysis and Reaction Engineering Team from 2000 to 2007, and has served as the Associate Director of the Institute for Integrated Catalysis (http://iic.pnl.gov) since 2008. In 2009, Dr. Wang assumed a joint position at Washington State University and PNNL. In this unique position, he continues to be a Laboratory Fellow and associate director of IIC at PNNL and is the Voiland Distinguished Professor in Chemical Engineering at WSU, full professorship with tenure.  In 2022, Dr. Wang was promoted to Regents Professor (the rank of Regents Professor can be held by no more than 30 Washington State University faculty members at any one time).

Dr. Wang is best known for his leadership in the development of novel catalytic materials and reaction engineering to address the issues related to energy and atom efficiency for converting fossil and biomass feedstocks to fuels and chemicals. Dr. Wang has authored 385 peer reviewed publications in lead scientific journals including Science, Nature group journals, J.Am.Chem.Soc, Angewandt Chemie, Energy and Env. Sci., ACS Catalysis, and the Journal of Catalysis with H index=85 and has more than 34,000 citations. He has co-edited 2 books and 6 special journal issues, and given more than 200 invited presentations since 2001. He is the inventor on 283 issued patents including 110 issued U.S. patents (>90% of his patents are licensed to industries). His discoveries in microchannel reaction technologies led to the formation of Velocys, trading under the London Stock Exchange (VLS). He is a member of the Washington State Academy of Science. He is a fellow of: NAI (National Academy of Inventors), AIChE (American Institute of Chemical Engineers), ACS (American Society of Chemistry), RSC (Royal Society of Chemistry), and AAAS (American Association of the Advancement of Science). He has won numerous awards including the 2021 ACS E.V. Murphree Award in Industrial and Engineering Chemistry, 2019 AIChE Catalysis and Reaction Engineering Practice Award, the 2018 American Chemical Society I&EC Division Fellow Award, the 2006 Asian American Engineer of the Year Award, the Presidential Green Chemistry Award, 3 R&D 100 Awards, a Distinguished Alumni Achievement Award from Chemical Engineering at WSU, 2 PNNL Inventor of the Year Awards, a Battelle Distinguished Inventor Award, and was the first recipient of the PNNL Laboratory Director’s Award for Exceptional Scientific Achievement.

He is the past chair of the Energy & Fuel Division of the American Chemical Society, past director of the Catalysis and Reaction Engineering division of AIChE, currently serves as Executive Editor of Chemical Engineering Journal and is on the editorial board of 7 catalysis and energy related journals including JACS Au and Catalysis Today.

Viewpoint on low-temperature methane oxidation for efficient emission control in natural gas vehicles: Pd and beyond

The {001} facet showed a lower apparent activation energy (or higher reactivity) than the {101} facet, which is due to weaker Lewis acid and Brønsted base strengths of the {001} facet that favors the reprotonation–desorption of the coupled intermediate, making the C–C coupling step more exothermic on the {001} facet and resulting in an earlier transition state with a lower activation barrier.

In collaboration with PNNL, we found that isolated Pd sites are much less active than PdO nanoparticles for methane oxdiation and H2O-induced deactivation on PdO nanoparticles can be readily circumvented by tuning the support hydrophobicity.

The active sites for low-temperature CO oxidation are elucidated over single-atom Pd1/CeO2 catalysts prepared via high-temperature atom trapping. Just like the Go game where chess pieces with no liberties are dead, the coordination-unsaturated Pd2+ ions on CeO2 are much more reactive than the fully coordinated counterpart.

Direct conversion of ethanol to n-butene over Ag-ZrO2/SiO2 catalysts was demonstrated with an exceptional butene-rich olefin selectivity of 88% at 99% conversion. This technology offers the potential for a reduction in the number of required processing units versus conventional alcohol-to-jet technology.

Fundamental insights into the deactivation mechanism of a Cu/SSZ-13 SCR catalyst under mild hydrothermal ageing conditions were elucidated, i.e., hydrothermal treatment results in stronger Cu–zeolite interactions, including relocation of Cu ions, leading to decreased reduction half cycle of the SCR reaction. 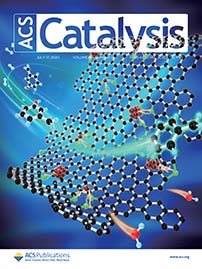 Embedding nitrogen into the carbon skeleton (mainly including pyridinic and pyrrolic nitrogen functional groups) plays an critical role in stabilizing Fe, while amino-N is inclined to suffering from wastage during the hydrodeoxygenation reaction. 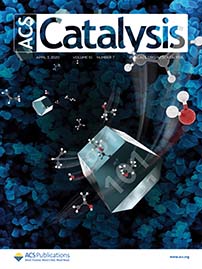 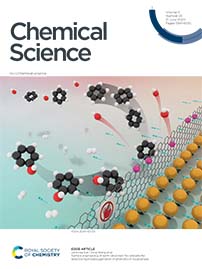 A few layers of graphene can be engineered on metallic Fe particles (G@Fe) to prevent the iron surface from oxidation by hydroxyls or water produced during HDO reaction, while the addition of Cs further promotes the selective C–O bond cleavage by inhibiting the tautomerization. 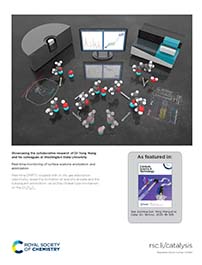 Real-time DRIFTS coupled with in situ gas adsorption calorimetry reveal the formation of acetone enolate and the subsequent aldolization via an Eley-Rideal type mechanism on the Zn1Zr10Oz. 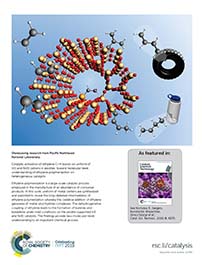 In collaborating with PNNL, uniform d8 metal centers are synthesized and exploited to reveal the long-debated intermediates of ethylene polymerization whereby the oxidative addition of ethylene generates d6 metal vinyl hydride complexes. The dehydrogenative coupling of ethylene leads to the formation of butenes and butadiene under mild conditions on the zeolite-supported Ir(I) and Ni(II) catalysts. 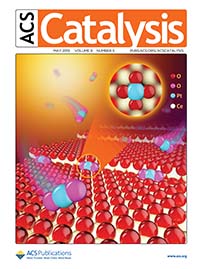 In collaboration with Datye group at UNM, it was found that the synthesis of single-atom catalysts by trapping volatile PtO2 gas phase molecules on step-edge sites of ceria (111) involves the Pt4+ ions bringing two oxygens (purple) which are now shared with uncoordinated Ce3+ cations, allowing the Pt2+ to achieve a stable square planar site. 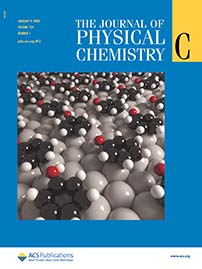 In collaboration with McEwen group, it was found that high-coverage ordered structure of phenol on Pt(111) contains the two most favorable adsorption sites that are co-adsorbed at a coverage of 0.125 ML. The red, black, white, and gray spheres are oxygen, carbon, hydrogen, and platinum atoms, respectively.

In collaboration with Jianzhi Hu from PNNL and Wachs group at Lehigh University, it was found that abatement of NOx emissions by selective catalytic reduction (SCR) on vanadia‐based heterogeneous catalysts proceeds via a two‐site mechanism over adjacent vanadia sites. The use of tungsten oxide results in vanadia oligomerization which enhances NOx abatement. 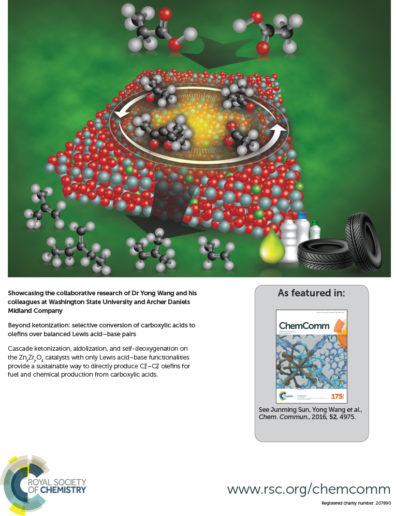 ChemComm has recently highlighted our group’s research in directly converting carboxylic acids were to light olefins with high selectivity over ZnxZryOz. 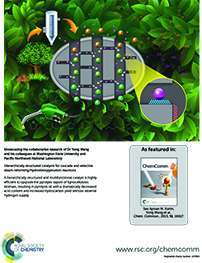 ChemComm has highlighted the joint work done at WSU and PNNL in Dr. Wang’s groups about upgrading the pyrolysis vapors of lignocellulosic biomass. 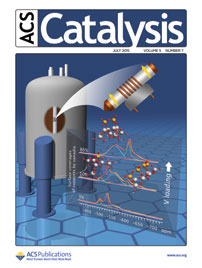 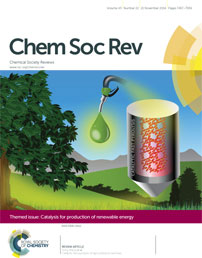 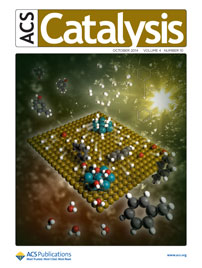 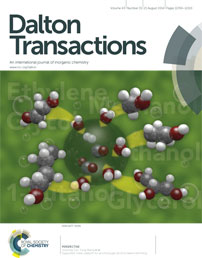 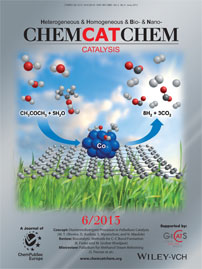 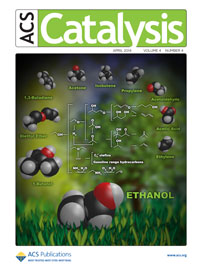 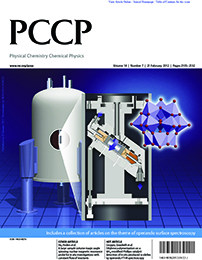 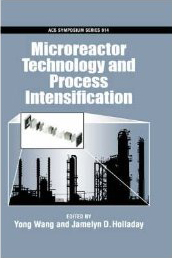